Do Cranberries Grow in Water?

Find out how cranberries are grown and harvested along with some other cool cranberry facts.

– Do cranberries grow in water?

– So, how do cranberries grow?

Cranberries (Vaccinium macrocarpon) grow in wetlands on low-running vines in dry beds layered with sand, peat, gravel and clay. These beds, called “bogs,” were originally made by glacial deposits.

Interested in growing cranberries at home? It’s quite easy! Learn how to do it in my cranberry growing guide.

Want to know about commercial cranberry growing? Watch the YouTube video below.

Are cranberries grown in water?

Ok, I still  feel your hesitation… 😊

I know what you are about to ask…

“Are you sure that cranberries do not grow in the water? What about all those Ocean Spray commercials with farmers standing deep in the water and cranberries floating around them? Is it a lie?”

Do you remember this 2006 Ocean Spray commercial reminding that cranberries are good for you?

The Ocean Spray commercial  was shot during “wet harvesting”.

Which leads us to another question:

How are cranberries harvested?

There are two methods of cranberry harvesting: “wet” and “dry”.

It occurs after the berries turn red, which usually starts at the end of September and lasts till November.

The night before cranberries are harvested, the bog is flooded with about 18 inches of water. Cranberries float to the surface, because each cranberry fruit has 4 air pockets.

Then the berries are cut from the vine by machine, gathered together, and sucked into a truck that will take them to the plant. They will be used  for making processed food, like cranberry juice or jams.

Approximately 90 percent of the cranberry crop is harvested this way.

Commercially, dry harvesting is done by special machines – Darlington, Furford or Western pickers. If you care to know more how it’s done, read it here.

Fresh cranberries you buy for Thanksgiving in the supermarket are “dry harvested”.

Which species of cranberry is grown commercially in the USA?

You are most familiar with  Vaccinium macrocarpon – large cranberries native to northern North America that are commercially grown in the USA, sold fresh in grocery stores and used in processed  cranberry products. Where do cranberries grow?

In Canada they grow in provinces of British Columbia and Quebec.

Cranberries are also grown in Northern and central Europe and Asia, and in Argentina.

How cranberries got their name

The name “cranberry” came from German kraanbere (English translation – craneberry), because the plant’s blossoms resemble the head and bill of a crane.

I do not know about other European countries, but in Ukraine cranberries are called “журавлина”, which translates as craneberry too, and in Russia, they are called “клюква” which can be translated as “beakberries”.

Discover useful gardening tips on growing and maintaining your garden. 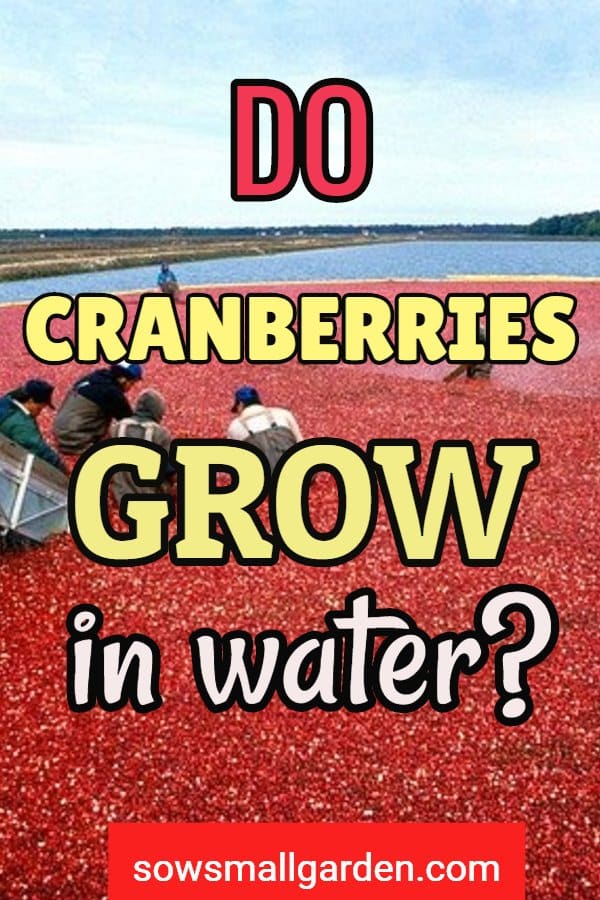 Final thoughts on “Do cranberries grow in water?” and other cranberry questions

I hope you got a lot of your questions about cranberries answered. You know now for sure, that cranberries are not grown in water, but flooding bogs with water is used during cranberry growing season and “wet harvesting”.

You might even get inspired to become a  cranberry farmer or get interested in growing your own cranberries in your garden. If so, then read my article How to grow cranberries at home.

“Do cranberries grow in water?” and other cool cranberry facts